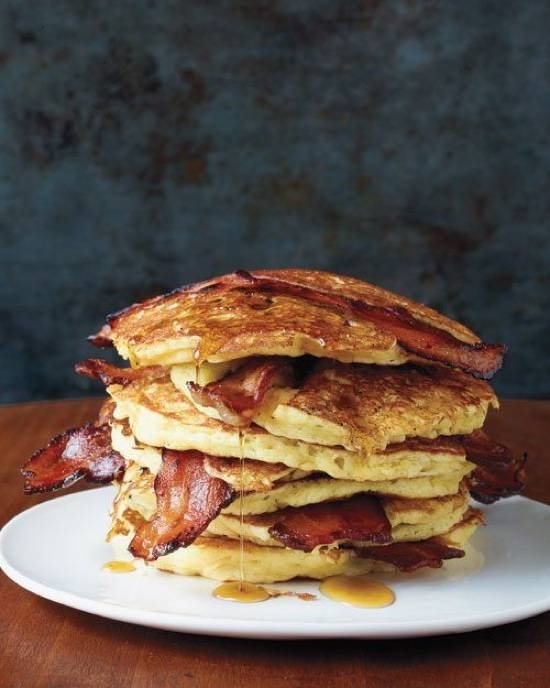 I can already see you looking at me is if I'm mad. Recipes under 450 calories can't contain bacon and cheese surely? Wrong! Seriously u2013 1 serving of these scummy pancakes comes in at just 291 calories.

Ingredients to serve 3
u2022 2 slices bacon
u2022 2 tbsp jalapeno pepper
u2022 3 tbsp grated parmesan cheese
u2022 Half cup flour
u2022 1 tbsp baking powder
u2022 1 tbsp sugar
u2022 Half tsp salt
u2022 Half cup yellow cornmeal
u2022 1 egg (large)
u2022 1 cup milk
u2022 2 tbsp sour cream
u2022 Small amount of vegetable oil
Method
First deseed and minced the jalapeno. Next pan fry the bacon until crisp. Drain on kitchen paper and leave to cool before crumbling into small pieces. Put the flour, cornmeal, baking powder, sugar and salt in a bowl and mix together. Mix the egg and milk together in another bowl and then combine the dry and wet ingredients in one bowl. Add in the sour cream and stir, and then mix in the jalapeno, cheese and bacon. Coat a non-stick pan with a small amount of oil. Put n a medium heat and ladle in u00bc cup of the batter mix per pancake. Cook for about 4 minutes until you can see bubbles, then flip and cook for another 4 minutes. Serve.

At only 291 calories you can afford to serve with a small drizzle of maple syrup and some extra strips of bacon if you wish. 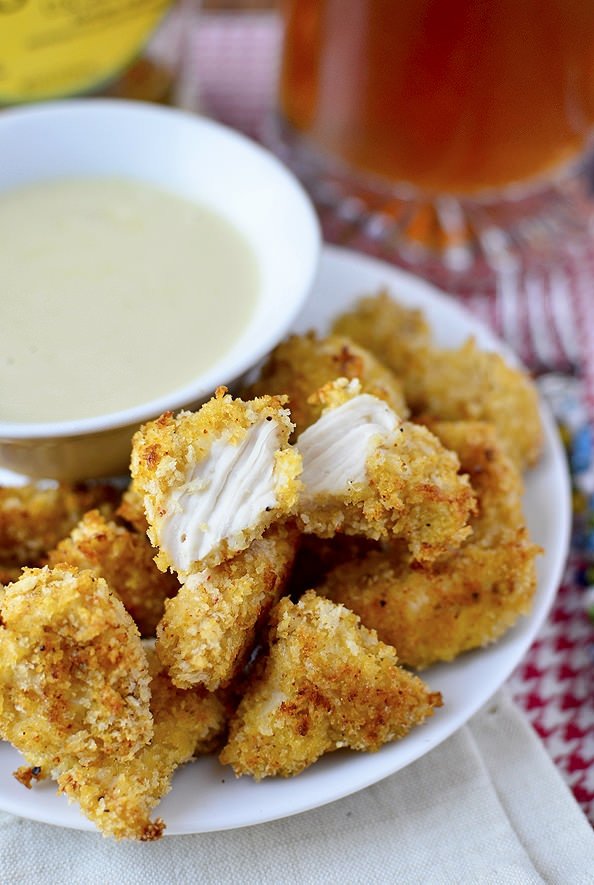 If you love breaded chicken but can't afford the calories, popcorn is a brilliant substitute for the breadcrumbs. A serving of this deliciousness comes in at 353 calories.

Ingredients to serve 4
u2022 1lb chicken thighs (boneless and skinless)
u2022 Half cup flour
u2022 Half tsp garlic powder
u2022 Quarter tsp salt
u2022 1 egg (large)
u2022 3 cups plain ready-popped popcorn
u2022 2 tbsp vegetable oil
u2022 1 tbsp unsalted butter
Method
Trim any fat off the chicken and cut into strips. Put the popcorn, garlic and salt into a food processor and pulse until it looks like breadcrumbs. Tip out into a shallow bowl. In another bowl put the flour and in another, put the egg and beat it. One at a time, dip each chicken strip first into the flour, then the egg, then the popcorn crumbs. Lay out on something non-stick. Put a large skillet on a medium-high heat and melt the oil and butter. Add chicken strips to the skillet, in small batches if necessary to not crowd the pan. Cook on one side for about 4 minutes until golden brown. Turn and cook for another 4 minutes until golden and make sure they are cooked through. Serve. 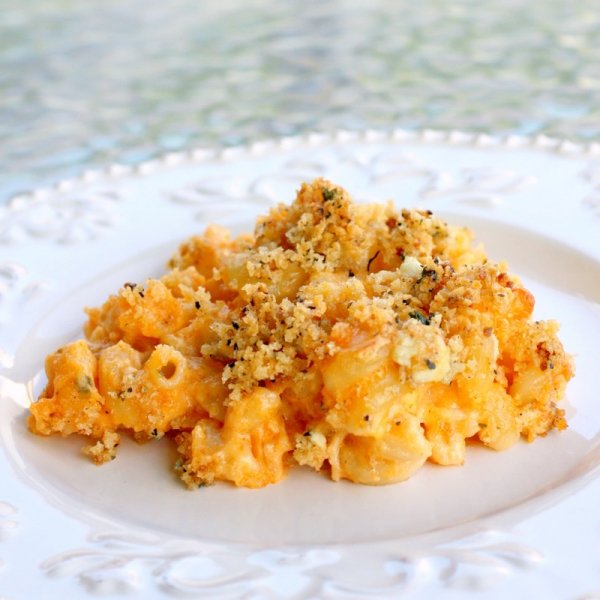 The surprise in this scrummy version of mac and cheese is not that a serving only has 311 calories, but that the nutritional value is ramped up by the addition of sweet potato.
Ingredients to serve 4
u2022 1 large sweet potato
u2022 3 cups dried macaroni
u2022 Half a medium onion finely chopped
u2022 Quarter cup skimmed milk
u2022 Quarter cup vegetable broth
u2022 1 tsp olive oil
u2022 1 oz flour
u2022 Half tsp Dijon mustard
u2022 Half tsp dried sage
u2022 Quarter teaspoon garlic powder
u2022 Pinch nutmeg
u2022 One cup grated sharp cheddar cheese
u2022 1 tbsp grated parmesan cheese
u2022 1 tbsp Panko breadcrumbs
u2022 Cooking spray
u2022 Salt and pepper
Method
Turn the oven on to preheat to 375 degrees F. Prick the sweet potato all over and cook in the microwave until tender u2013 usually about 5 minutes each side. When cool enough to handle, cut potato in half, scoop out the flesh and mash well until it's almost smooth. Cook the pasta until it is slightly underdone u2013 about 2 minutes less than the packet instructions. Drain and set aside.

In a saucepan, heat the olive oil on a medium heat. Add the onion and cook until tender and then add the garlic and sage, cooking for a further minute. Stir in the flour and cook, stirring continuously for 2 minutes to make a roux. Using a whisk, gradually add the broth and milk to the flour mix. Simmer for 5 minutes whisking until the mixture thickens. Now stir in the sweet potato, cheese, mustard, nutmeg and season to taste. Cook until cheese is melted and then stir in the pasta. Mix until well combined. Use cooking spray to lightly coat an 11x7 inch baking dish and tip in the pasta mix. In a small bowl, mix together the breadcrumbs and parmesan cheese. Sprinkle over the pasta. Bake in the oven for about 20 minutes hen transfer to the broiler for about 1 minute until the breadcrumbs are toasted golden brown. Serve. 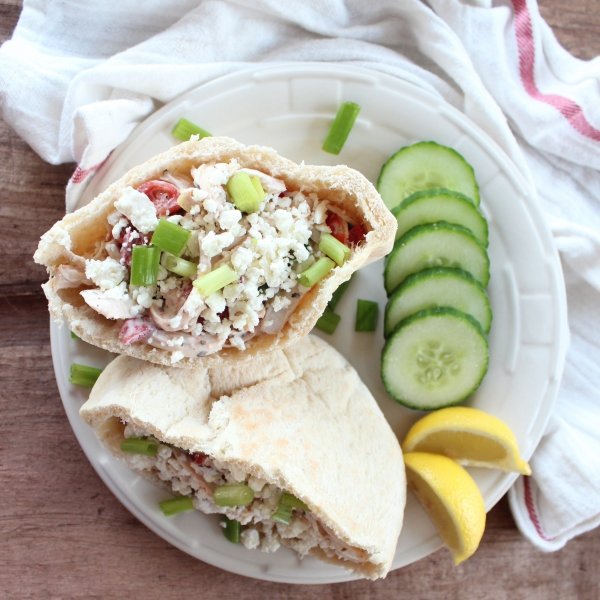 Some recipes of less than 450 calories are great for lunch but also as an accompaniment to some lean protein as a main meal. Just like this yummy salad. Fill the pita for lunch but have it on the side with some grilled chicken, steak or fish for mains. Calorie count without the protein is 368. 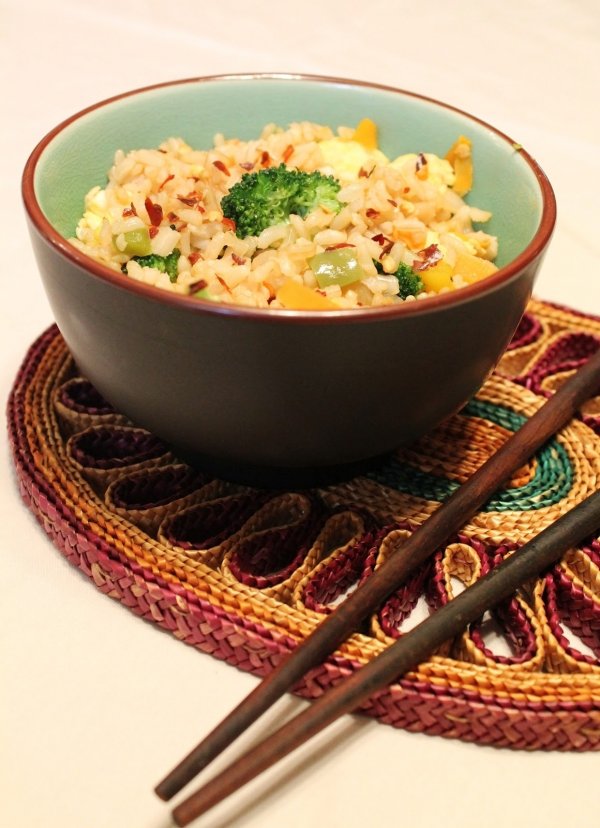 Healthy food is so much better if it looks attractive. The veggies in this look like little jewels so it's as pleasing to the eye as it is as good for your tummy. Just 395 calories for this yummy dish.

Method
In a wok or skillet, gently heat the vegetable oil. Add the onions and cook until soft and translucent. Add all the other vegetables and stir fry until lightly cooked. Add the rice and sesame oil and heat through, stirring all the time. Beat the egg well and then stir into the mix, making sure to create clumps and ribbons of cooked egg through the mix of rice and veggies. Season if required and serve.

Again, this is a dish that's good enough eaten on its own or can serve as a side to a piece of protein. 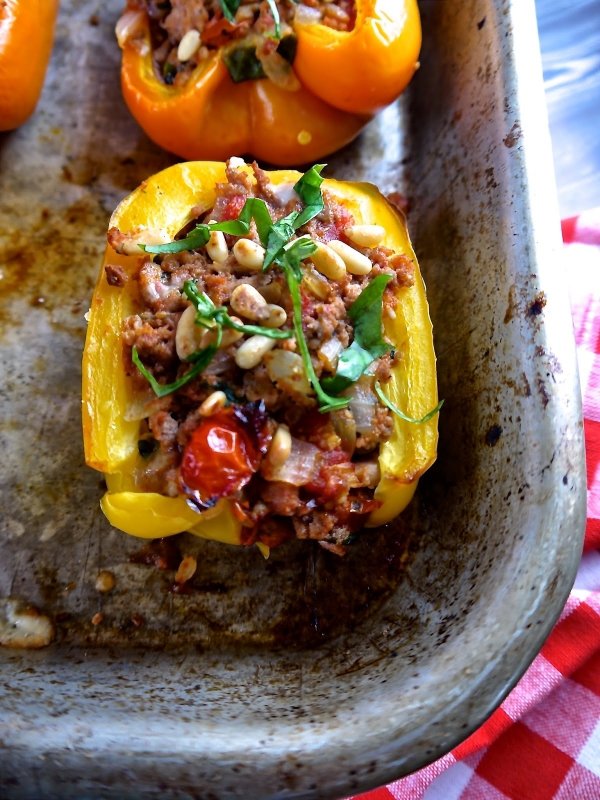 With this recipe you can have summer on your table all year round. The ground pork can be replaced by ground turkey if you want an even leaner recipe or you don't eat pork. With pork you'll be eating 190 calories.

Method
Cut the peppers in half and remove the pith and seeds. Put them on a microwaveable plate, cut side down. Cook on high in the microwave for 4 minutes until just soft. Do not overcook. Fry the pork in the oil until it starts to brown, breaking down any lumps. Add the garlic, cumin and paprika and stir. Then add the bulgur wheat and stock. Cover and cook on simmer until the bulgur is soft u2013 about 10 minutes. Turn on your broiler to heat up. Add half the parsley into the bulgur/pork mix. Put the peppers cut side up on a grill pan/tray and fill with the meat mix. Grill in the broiler until toasted on top. Mix the remaining parsley with the yogurt and spoon over to serve.

7. Cod with Thyme and Tomatoes 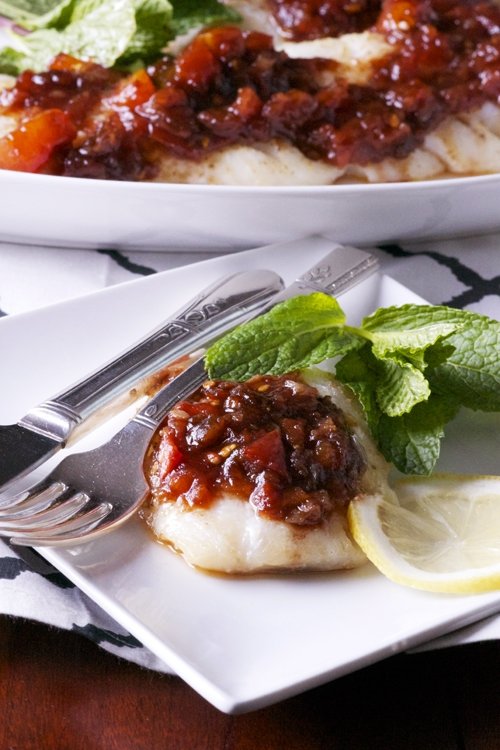 This delicious fish dish has one of the lowest counts in my list of recipes under 450 calories. Would you believe it has less than 175 calories? I've said cod but really any flaky white fish will work just as well. (Please buy fish from sustainable sources food.allwomenstalk.com) This is a really tasty and excellent midweek dish that you can eat with a crispy green salad and/or some baby potatoes, or a baked (sweet) potato.

Method
Use a deep wide skillet with lid for this. Peel and chop the onion then fry in the oil until lightly brown. Add the tomatoes, sugar and soy and stir. Strip the leaves from the thyme sprigs and add to the frying pan. Stir and bring to the boil. Reduce heat and simmer for 5 minutes. Add the cod fillets to the sauce. Cover the skillet and cook gently until the cod is tender and flaky u2013 generally for 8-10 minutes. Serve.

I hope you find something to your liking in these recipes. Why not give something new a try? Do you have a favorite healthy recipe to share? 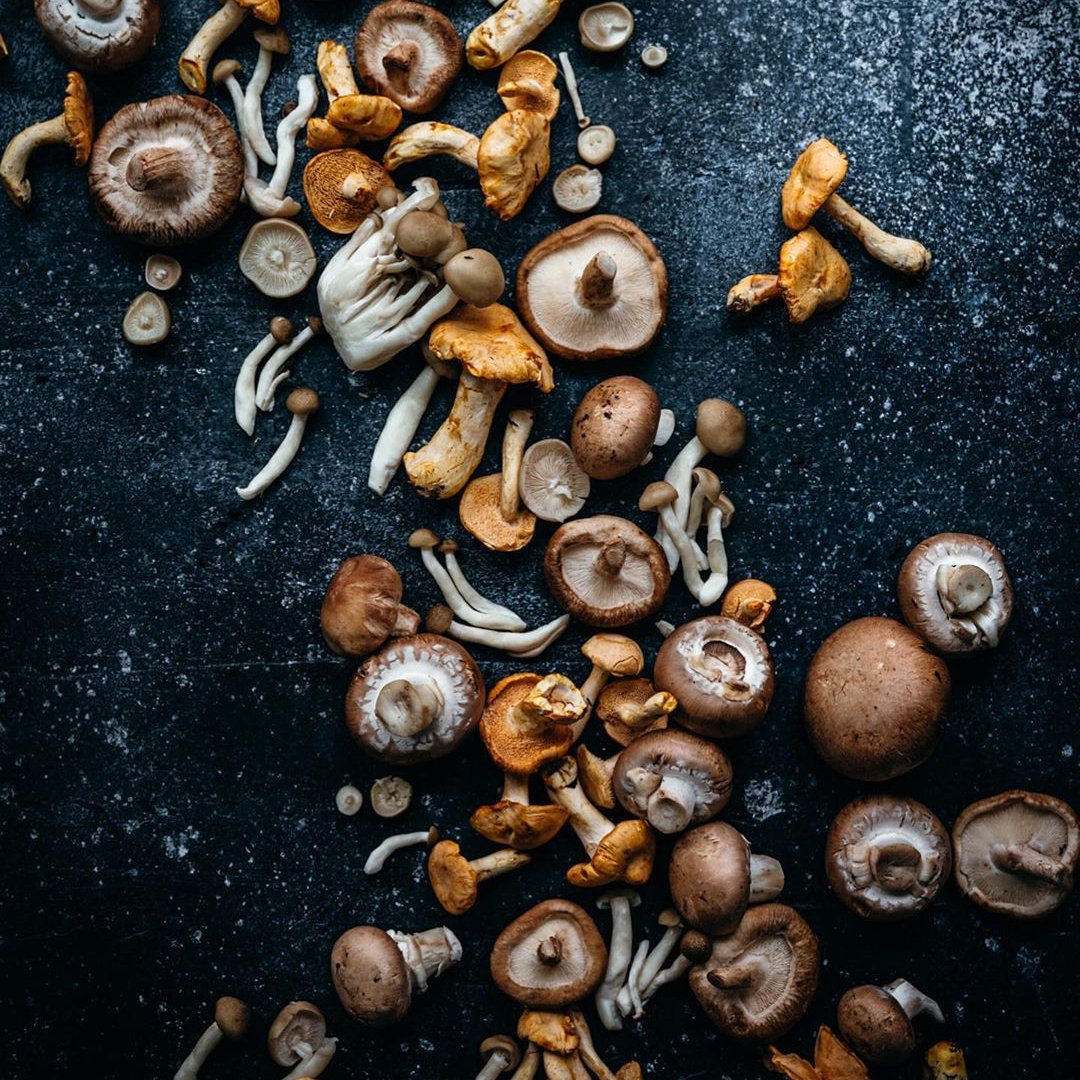 Certain foods should always be in our grocery carts if you ask me, such as these foods with proven medicinal benefits. Most of these foods can be found at any